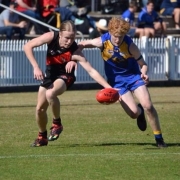 Congrats to Sam (Milky) Milligan on his 50 game milestone!

Milky had a shout out for his 50th a week or so ago, but we missed the post, so we’re catching up with that now!!

Sam played his early footy at Hornsby before making his way over to that great footy factory that is St Ives Juniors. Milky played his first North Shore game for our 19’s in 2019 and since then has become one of the fittest and most improved players in the club.

After starting his senior career in Div 2, Sam has worked hard to progress to Div 1 and then on to play some good footy in Ressies.

Well done Milky, congrats on 50 games and we’re looking forward to seeing what the next 50 hold!!

Tweets by northshorefc
Round 16 Team Selections