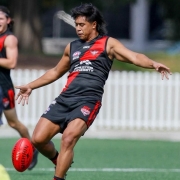 We tip our hats this week to a wizard of the game, Marlon Marquez as he brings up his 150th game for the Bombers this weekend.

Originally a Baulko junior, Marlon first made the journey to the hill with good mate Lachy Hayres and we’re forever grateful that he continued to make the trip down the M2 each week to proudly wear the colours he’ll undoubtedly have on under the Arbor when he hitches his long time sweetheart Angeline.

Marlon the Magician is a multi premiership player, which is kudos a plenty, however he’s best known for his number 1 fan, the voice of Blacktown Stadium, the screech of the west… his lovely mum Larraine. She positions herself on the farthest wing, away from scrutinising eyes but not far enough from their ears… Listen out for her in September!!

Huge congrats to a man who’s steadfast in his desire to win the footy, has never taken a backward step & will always put team first. Hope there’s another 150 games to come!

Round 16 Scoreboard
Scroll to top