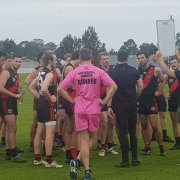 The 2020 season added some extra strain to our Men’s Division Three team was hit hard with their second team not approved for this season.

The loss of this team resulted in a large excess of players who faced getting very little game time in an unusually short season. However Men’s Division Three head coach Hamish Beynon was highly impressed by the players efforts to ensure everyone was included in the 2020 season.

‘Players [were] reaching out and helping to run scratch matches and training sessions to try and keep everyone involved and enjoying their footy with the limited playing time available’, Hamish comments on the incredible volunteering efforts of the boys!

However despite having their season shaken up by a global pandemic and losing their second team this did nothing to stop the boys in their tracks as they pushed through the season and made it all the way to the Grand Final! With a last minute goal against UNSW in the semi final the Division Three boys had worked hard to achieve the spot they did in the Grand Final.

Hamish coaches not because he is necessarily a natural born coaching phenomenon but because he loves giving back to a club which has given him so much in the years that he has been involved. Hamish enjoys seeing players mature within themselves, learn new skills and grow as both footballers and people.

One thing that 2020 has shown us, above all else, is how important football is to a community. ‘2020 showed demonstrated how important football, or just community sport in general, means to so much to so many in different ways. Often in the past we have taken it for granted, but 2020 showed how vital football can be as an outlet from the harsh realities of daily life’, Hamish comments as he looks toward the 2021 season in which he hopes the famous and vibrant social aspect will return to North Shore Bombers.

2021 will see the Men’s Division Three focus on their program and maintain their family and community atmosphere as arguably one of the best in Sydney AFL and working hard to maintain the numbers they are seeing at training to prove they can field two division three teams whilst equally opening the doors and welcoming any new players that want to have a fresh start in 2021!