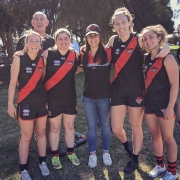 Continuing our series when we hear from the coaches on the 2020 season; today it’s Graham Swan’s turn as he reflects on the Womens Division Two side.

Graham Swan, head coach of the Women’s Division Two team, was brought to the club under extenuating circumstances. His daughter Tori had been an inaugural player for the women’s program and tragically passed away suddenly two years ago.

Recognising the significance of North Shore in Tori’s life and wanting to hold onto his daughter’s memory, Graham joined the coaching staff in 2019 and in 2020 he was approached to become a coach and accepted the role as head coach of the Division Two team!

While Graham could list 1,000 things that made the 2020 season spectacular for himself the top of the list is was being given, ‘The opportunity to learn what a beautiful and powerful energy can be generated by a group of young women committed to doing something together and having fun whilst doing it’. Though starting the season with three straight wins and one landing 117 points in a 112 minute game was a close second.

Seeing first hand evidence of how beneficial the women’s programme is for footy, for the women playing and in Graham’s words, ‘…for the blokes in the club even if they can’t see it yet’, has only made Graham prouder of what his team and the entire women’s squad has accomplished this year.

With a large background in the Navy and Rugby teams/clubs Graham has been exposed to a variety of different inclusion programmes, though says, ‘The [North Shore Bombers] women’s programme has the most supportive, inclusive and sporting spirit of any programme [he] ha[s] ever been involved in’.

Due to work and family commitments Graham is unable to return to coach the team in 2021 however is in no doubt that they will be hopefully lead with a powerful force and, ‘under the care and guidance of super coach Georgia Watts’.