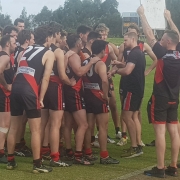 Following on with our 2020 reviews from our coaches we check in with Simon Shipley, head coach of the Men’s Division One team on how their 2020 AFL Sydney season went.

Simon’s love for coaching stems from his passion for helping players improve both as footballers and people. There are also major opportunities to build relationships through North Shore to which Simon enjoys to actively participate in building upon the community and culture of the club which to Simon is a place of, ‘Truly good people, one of the best all weather surfaces to train on, and a football club with the best culture in Sydney AFL’.

The 2020 season is a fine display of Simon’s passion for improvement despite facing an odd year and being severely impacted our season in many ways; however the resilience of the Division One boys and their continued commitment to the season has created a formidable and serious football team.

Despite the extenuating circumstances that followed the season the boys were able to develop a recognisable game plan that was key in them finishing at the top of the ladder and making it all the way to the grand final. Simon strived to look on the positives of the COVID-19 interrupted season and comments how much he enjoyed, ‘The opportunity to train in much smaller groups allowing a higher level of individual training’, which ultimately assisted in leading to the impressive squad of footballers delivered this season.

The 2021 season will hopefully bring with it more social events and more opportunities for multiple squads to train together thus building closer relationships between the Division One boys and the senior squads.

Simon and the Division One boys are keen to focus their preseason on developing their game plan with specific focus on hard contest work and other components that will be key to winning finals football and taking it one step further in 2021.