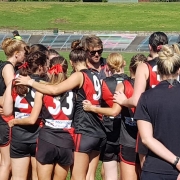 We have said it 100 times before and we will likely say it 100 times again. 2020 has been a really tough year all round for everyone in some way shape or form.

Though the year of 2020 from a footy perspective, while disrupted at times, was a way for many people to still enjoy at least some form of their pre-COVID.

So we have caught up with our coaches to see how their season has gone and what their expectations and visions are for the season ahead!

2020 was an unsettled year for football. The season was postponed, then cancelled, then reinstated, with restrictions in place that broke apart training as a club.

Our head coach Locky Pryor reflects on the 2020 season, ‘ I can’t shake this feeling we make have let one get away this year, but when you really look at the stats and numbers it was a great year…’. With most of the team only having played 2-3 games together and only having a 9 round season, the team still managed to click toward the end of the season; which has left them in great form for the 2021 preseason/playing-season ahead.

‘Many other clubs have had the luxury of playing together as a team for 5-10 years, so with only 9 rounds and a disrupted preseason it was always going be tough to create a connection as a team and you have to keep that in mind’, Locky continues.

Though with overall pride Locky reflects that the biggest highlight of the Women’s Premier Division squad for the 2020 season has to be making finals in their first year! And that for the whole women’s program being approved for a 5th team was a big success as it reflects the number of locals looking to join the AFL community.

As we head into the 2021 preseason/playing-season the focus for the women’s squad will be to focus on creating a training regime that is sustainable for the 10 months of the year that involve footy. ‘So the way I see it, we have had a little test run, found what worked and what didn’t, the coaching group actually knows each other and the players now know each other, so I cant wait to see what we can do in 2021 with a real pre-season together’, Locky comments about the 2021season to come!

As a coach coming into 2021 Locky will be putting an important focus on player development and building a culture and standards that assist the immense amount of talented players we have in progressing to an even higher level. ‘Supporting these players and getting around them for their individual goals will be a key personal goal for me this coming season as a coach’, Locky remarks.

And of course there is hunger out there from all our women’s to get that first flag!

Locky has high hopes that with a strong preseason all the women’s squads will realistically be well equipped to bring home a flag in the 2021 season.