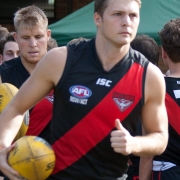 Now retiring Club Captain, from 2017-2018, Teddy Strudwick will be one player who will be sorely missed. Beginning when he was only16in 2007Teddy has become such a key part of North Shore on and off the field as he retires 12 years later.

While Teddy may reflect on his time as captain as, ‘never really [having] the chance to perform due to injuries’ He misses the incredible impacts he still managed to have on the club outside of game time. If you ask anyone around North Shore they will comment on Teddy’s commitment and passion for a club despite unfortunately being injured.

Teddy was a junior Willoughby player and he comments that they would, ‘always watch the seniors train after us and they became some what of our idols. Then getting the chance to play with people we had watched as kids was pretty special.’

Once he made it to playing in the senior side Teddy says that, ‘I will miss the Hill on a Saturday arvo on Back to Bears Day with a passionate crowd cheering us on and giving it to the opposition. Those moments are something else and give you tingles on the field.’

Teddy has seen a lot in his 12 years at North Shore, from the hardships to the good times and also the introduction of a women’s program which has grown immensely in its three years of running. He comments that, ‘being one of the few players who were here during the tough times and saw our club go from 3 pretty average teams to 12 and be successful on and off the field in only 4 years is something I am very proud of. My memory of the club leaving as a player is that it is my family, not a club.’

Teddy would like to leave North Shore as a player with some final parting thanks and a few words of wisdom for future players moving through the ranks;

‘Thank you to; all the volunteers, committee members and coaches this club is nothing without you, for giving me the opportunity to do what I love. To my parents who took me around the country as a kid to play this crazy game and pushed me to achieve my best, you are both so supportive even from the other side of the world and I love you both very much. To the players present and future I will leave you with this – what I get to take away from North Shore is a family. This has been my family for the last 12 years and that time has flown by so make sure you take every opportunity that you have because you might not get it again. Be sure to enjoy the highs because you deserve it and learn from the lows because that is where every great team starts. There is something very special around the corner for this club so make sure you enjoy the ride and squeeze every little bit out it because you never know when it is going to end’.

Tweets by northshorefc
Thanks for the Memories – Sam Carruthers

Thanks for the Memories – Andrew McConnell
Scroll to top