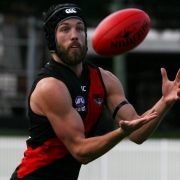 Andrew McConnell, while only at North Shore for a short period, is another player we are saying goodbye to after the 2019 season. Andrew joined the club in 2017 after previously playing for East Coast though location and friends who, ‘couldn’t have talked more highly of the club’, brought him to North Shore’s door step.

Andrew leaves North Shore in 2019 with so many memories from his short but incredible time at North Shore. He has made life long friends and comments that, ‘the quality of people at the club’, is one aspect of North Shore which he enjoyed most.

Coach Ryan Meldrum was a huge influence on Andrew’s football career and a part of his motivation and encouragement to continue to better himself as a player on and off the field while at North Shore.

Andrew comments that while the club has brought him so many memories he will hold with him including, ‘finishing at the top of the ladder in 2018’ as a personal favourite, he will miss the social aspect of the club and, ‘not being able to see my mates 3-4 times a week.’

Andrew will be missed within the club though, just as with the rest of this years retiree’s, we hope to see him on the hill, watching some good old fashioned North Shore football with his friends every now and then.

Tweets by northshorefc
Thanks for the Memories – Teddy Strudwick