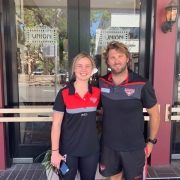 The North Shore Bombers Women’s program has been growing at a rapid pace since it’s inception in 2016. The first pre-season training session in 2017 had only 11 girls turn up for training. Now, 3 years later, there are 4 teams with over 100 women coming down for pre-season training for the 2020 season.
The 2020 season for North Shore Bombers sees the first season Bombers have fielded a Women’s Premier Division side—a great leap forward for the club from that first pre-season training session. This stellar side is led by coach Locky Pryor and has enticed some young talent to pull on the red and black for the first time.

Maggie Gorham, 18 years old, is from country NSW town Young where she lived for 8 years before moving to Canberra.
“I started playing AFL when I was 12”, convinced by her best friend who was playing for Belconnen Magpies to give it a go. She began her career as a midfielder though since making the transition to women’s football has found herself playing forward much more.

A lot of pressure from a young age saw Gorham consider leaving the sport for new endeavours though she comments that, “my first game back after thinking I was going to quit AFL for good…I just remember the feeling of ‘oh my god, I love this club [then Belconnen Magpies] and I love this sport'”.
Having just finished year 12, Gorham does not take a break. Making the move to Sydney over the next few months, Gorham will be playing and training with the Greater Western Sydney Giants and will commence her season with North Shore in the new year.
Gorham notes that, “I knew how important it is to have a coach that you not only be seen as your coach but could be seen as your mate as well”.

Upon meeting Premier Division Coach Locky Pryor, Gorham saw both of these and coupled with, “Meeting some of the girls I knew they were girls I wanted to be around”, She knew North Shore was the club of choice.
Having seen a massive growth in Women’s AFL in Canberra Gorham is excited to see the same happening in Sydney and says, “I am really looking forward to the 2020 season, hopefully not only for myself but the whole North Shore footy club it will be a good first year for us in the Premier division. The girls at North Shore seem super happy where they are playing and the girls they are playing with.”
We welcome Maggie Gorham to North Shore and are all excited to see what this new season of progress in women’s AFL holds.

Tweets by northshorefc
Thanks for the Memories – Andrew McConnell