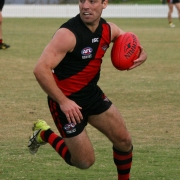 Sam Carruthers has been a part of the North Shore football club since 2007. There were things that made him choose North Shore such as, ‘Inclusiveness and the clubs culture which always involved a drink and a laugh.’ But also the faith and kindness shown by those already involved in the club such as long time North Shore coach Jon Hares who, ‘Gave [him] a chance to lead the club to which [Sam] will be forever grateful’. Though there were a few additions which made him choose to stay at North Shore for so long. Sam reflects that he has made, ‘life long friends’ who he will miss ‘not having an excuse to see every other night of the week.’ There is a certain aura which surrounds North Shore on home game days at Gore Hill to which Sam says he will miss, ‘Saturday morning on the hill — that game day buzz.’

Not only does Sam reflect on his time at North Shore Bombers but also the impact the club has had on his family. ‘This club has been amazing to me and my family. I think that the difference is and hopefully always will be compared to other clubs is its inclusivity.’ This being reflective of, though not exclusive to, Sam’s younger sister Dom playing and winning the female club best and fairest in the women’s inaugural season. Sam’s, now fiancée, Jessica and his parents Jeff and Gill have also all been welcomed and are a strong part of North Shore culture since his first season, making life long friends themselves.

Sam leaves North Shore in 2019 as an outstanding player who shows loyalty and passion with a final parting comment that as long as North Shore does not waiver in it’s inclusiveness and passion as a club, ‘it will be the best and strongest club in Sydney.’

Tweets by northshorefc
Thanks for the Memories – Ryan Meldrum

Thanks for the Memories – Teddy Strudwick
Scroll to top