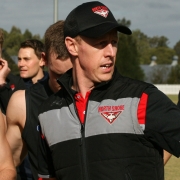 Among the key players we have retiring at the end of the 2019 season is the Premier Division side coach Ryan ‘Molly’ Meldrum. Molly has been coach from 2016–2019 and has had a huge impact on many people around the club.

As many of our players have commented, ‘The club feeling and all the members of the club have been fantastic. It is a really enjoyable place to be through the week and especially on game day’, has been an aspect of being a part of North Shore that Molly has enjoyed most. Though his main highlights and memories have been through, ‘seeing the development of our young players and future stars coming through makes the future very exciting for North Shore’.
As anyone who has been at Gore Hill on a Saturday will know Molly’s family, young children and beautiful wife, have spent many Saturdays over the past 4 years at North Shore game days. He reflects that a key aspect he involved in the club was bringing, ‘a real family feel to the club where everyone feels included and valued’, Though he also held a focus on, ‘a professional approach to community football where players can be the best players they can be’.

All Bombers know that the past year and a half have brought us on the road as Gore Hill was redeveloped. The reward was well worth the wait as we returned to a new ground this year. While, as Premier Division coach, Molly has had many memorable moments he comments, ‘a real highlight was returning to the new Gore Hill after a number of years without a home ground, we have an unbelievable facility now’.
There is nothing better after a win than the sound of the Bombers song ringing through the change rooms which is exactly what Molly will miss most.

Thank-you for everything Molly over the past four years, your time, your families support and your passion for every player who has come across your team.

Tweets by northshorefc
Thanks for the Memories Week

Thanks for the Memories – Sam Carruthers
Scroll to top