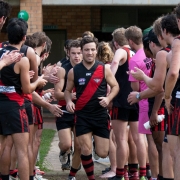 Every football club has it’s ups and downs as a club. With teams that win all the time or boys and girls who are just finding their feet together and building something special. North Shore, with it’s long history in Sydney AFL, has been through a lot as a club over the past decade.

While there have been many players, coaches and volunteers which have contributed to it’s great success, especially over the past four to five years, there were some players and coach in particular whom have stood by the club and whom we now with heavy hearts have to say goodbye to.

Join us on northshorefc.com.au this week as we farewell some retiring legends who have made a significant contribution to our club.

Thanks for the Memories – Ryan Meldrum
Scroll to top