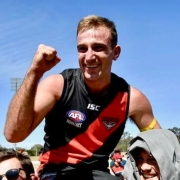 Congratulations to Michael Jones (MJ) on playing his 150th game for the club tomorrow.

MJ, started with North Shore in 2013 in the (then) U18s competition, under the watchful eye of Jamie O’Dell.

In those early years, MJ missed opportunities on the last Saturday in September twice due to concussion.

However, Michael has persisted with his football, making a name for himself as a fast-running and skilful wingman in the Men’s Division 2 and 3 sides and developing, in recent years, into a handy forward. He is also easily the most consistently chirpy player at North Shore over the past decade, and never afraid to ask for some advice about his game.

Never short of a word around the footy club or on the track either, Michael’s work ethic and persistence saw him selected in the Men’s Division 3 Grand Final side in 2019, which brought the cup home to Gore Hill and remains MJ’s favourite memory of his journey so far with the Bombers.

Congratulations on your journey with the Bombers for the past 10 years Michael, for your dedication to the club, training and to the playing group. With your continued work ethic and commitment to your football, we wish you all the best on your way to 200 (and beyond) and in tomorrow’s home game! We also look forward to your pre and post-game chat, which no doubt will be lively tomorrow. Go Bombers!

Round 16 Team Selections
Scroll to top