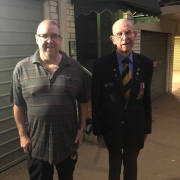 It is with much sadness that we must inform the club of the passing of Terry Kennedy, Stuart’s father, late last week.

Most of you will know Stuart, one of our dedicated match-day volunteers and who maintains our player registration; a rapidly-growing task as our player numbers continue to grow.

Health battles had kept Terry away from Gore Hill in recent years. But many of you who have been round for a while will remember Terry selling raffle tickets on game day at Gore Hill, a job he faithfully volunteered to do for several years. And plenty of you have bought the cakes that he used to donate to the canteen over the years.

Terry loved his footy, and the annual visit of his beloved Geelong Cats to the SCG to play the Swans was always a highlight. As well as following the fortunes of the mighty North Shore Bombers.

Vale Terry. He will be missed. Condolences to his family and friends; and especially to Stuart at this difficult time.