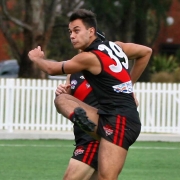 North Shore has a reputation as one of the finest nurseries of football talent in this state; and our outstanding record of player development will again be there for all to see on Saturday.

On Saturday afternoon, a Sydney AFL under-22 representative team will take on the Swans Academy at Blacktown. Both sides will have a strong North Shore presence, with no less than 13 Bombers taking part in the match.

The Sydney AFL team will include Josh Rayner, Ned Campbell, Matt Buskariol and Tom Drum. Harrison Parker had originally been selected, but unfortunately is ruled out with injury.

It’s a great opportunity to impress, maybe even for some players a chance to put themselves into the AFL draft mix; and our North Shore representatives on both sides are keen to take on the challenge.

The match will be played at Blacktown International Sportspark on Saturday 7th March at 12:30pm. Admission is free.

Come along and cheer on our young Bomber legends.

Want to join the discussion?
Feel free to contribute!