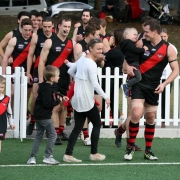 With a whopping 16 seasons, 231 games and 650 goals under his belt, Danny Roberts is one senior forward who is sure to be missed as he retires from North Shore.

‘Joining the club in 2000 and going from a settled 3 team structure to the enormous club it has become today’, is one of Danny’s highlights of playing for the Bombers, with the club going through many different phases in that time and now five times the size as when he joined. Danny has scored an incredible 650 goals for North Shore in his 19 years at the club; with one season seeing him net 126 goals, including 16 one afternoon at North Sydney Oval.

A part of the senior side in 2004 when they brought home the premiership flag Danny notes that one of the greatest aspects of a North Shore game day is ‘…10 minutes before a game starts, the change rooms are buzzing and you just know you have one of the best few hours in life ahead of you’.

While he may not pull the red and black on again he says, ‘Hopefully not too long before another Roberts runs out in the red and black with the eldest two kids already in Auskick at Gore Hill on Sunday mornings’. And while for now Danny is unsure how he will spend is free weekends in Winter he is sure that, ‘the kids will still want to go and watch the bombers play so I may not stay away for long’.

But to Danny North Shore is much more than kicking goals and winning games. North Shore is the place where he met his wife of 11 years. Anna was the club physio in the early 2000s at North Shore and after marrying in 2008 they now have ‘…5 sensational kids’. This beautiful connection made at North Shore has ‘created a special bond between the club and our family’, with Danny leaving more than just a place to play football behind.

While he may not pull the red and black on again, he says ‘hopefully it’s not too long before another Roberts runs out in the red and black’, with Danny’s two eldest kids, Xavier and Ollie already in Auskick at Gore Hill on Sunday mornings, with Harry and Charlie to join them shortly. Danny is no doubt going to have a few more free weekends ahead of him but ‘the kids will no doubt still want to go and watch the bombers play so I may not be away for long’.

Thank you for all of your time over the past 19 years Danny and all you have given the club. We hope to see you and your family still lingering around Gore Hill on game day cheering on the red and black!