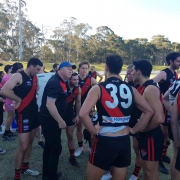 Following on from the recent news that North Shore will be fielding a Women’s Premier Division for the first time in 2020, we have great pleasure in confirming that our inaugural Women’s Premier Division Head Coach will be Locky Pryor. Locky has been involved with the squad over the past couple of years and joined Peter Gurry to coach our Division 1 team this year. He has a long and decorated history at North Shore, including being a dual Premier Division Best & Fairest winner and he was also a member of the 2007 Premier Division premiership team. Along with Peter and the Women’s leadership group, Locky was also heavily involved in developing our successful Premier Division application and I’ve got no doubt that he will make a fantastic Premier Division coach. In related good news, Josh Terrey will be joining the coaching panel to work with Locky as an assistant and he will also lead our Women’s strength and conditioning program.

After reviewings several very strong applications for the position, we would like to announce that Michael Ford has been appointed as our Men’s Premier Division Head Coach. Michael has an extensive playing and coaching background that includes 98 VFL/AFL games with Footscray and St Kilda, a premiership as player with Sandringham and also as head coach at Springvale, as well as other coaching roles at Casey, Williamstown and Melbourne Grammar School. Michael was an assistant to Ryan (Molly) Meldrum this season, so he is in an ideal position to leverage his extensive experience to build on the great platform that Molly has created for our club. Joining the senior coaching group with Michael is Jamie O’Dell and we expect to compliment the group with additional specialist coaches over the coming weeks.

We are fortunate to be in a position to appoint two very good people to our Head Coach roles, so please join me in congratulating them and wishing them well.
Bring on 2020!!