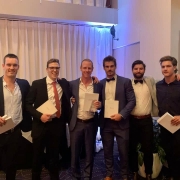 More than 200 people attended the North Shore Best & Fairest Ball last Saturday night at the Kirribilli Club to look back on the season that was. A season that saw 12 North Shore teams take the field, seven of them play finals and Division 3A take out the premiership.

It marks the end of an era, with Ryan Meldrum’s coaching career coming to an end; while senior players Teddy Strudwick, Sam Carruthers, Chris Murphy, Selby Lee-Steere and Shaun Crane hanging up the boots or moving interstate next year.

But it’s also the start of a new era, with Michael Ford taking over as Mens Premier Division coach and Locky Pryor taking the reigns for the newly-promoted Womens Premier Division team. And the opportunity is there for players to step up into senior footy and take on a leadership role.

The Best & Fairest award was taken out by Ned Campbell. At just 19 years of age, Ned stepped up this season and showed the ability to be a star for North Shore for many years to come.

The award winners for 2019 were

Mens Fifths A (Division 3A)

Mens Fifths B (Division 3B)

Congratulations to all winners.