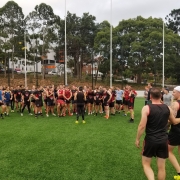 Third after home and away season. (Final five system)

What Happens from Here:

We’ve split our meetings with St George so far this year, the home team getting up both times; but this time it’s on neutral territory at Blacktown.

Our Fourths this season has played a solid team game all year. It’s remarkable that no-one has kicked more than 11 goals, but it shows this is a team with multiple avenues to goal; and the test is to rise to the occasion and accumulate a winning team score.

Expect a close and tight contest this time round. There’s plenty of quality players in this team who are capable of standing up when the game is there to be won and getting the job done.