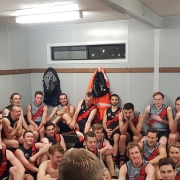 Mens Fifths A (Division 3A)

Second after home and away season. (Final five system)

What Happens from Here:

It’s a re-match against Southern Power; this time on neutral territory after we beat them on their turf last week. With two strong wins already against the Power this year, we know the Bombers have the runs on the board to overcome this opponent.

It’s been a great season for our Fifths A squad; underlining the depth and growth in our club that we have a team capable of matching it with the best at this level. So strong has been the growth that we nominated a Fifths B team on the eve of the season and put two full teams on the park in Division Three every week.

Finals are a whole new ball game; but this is a squad with the skill, the fitness and the passion to go all the way if they put in to their optimum ability.