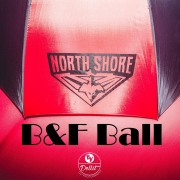 Although 2018 didn’t deliver a premiership, there was much to celebrate at North Shore as the Bombers met for the Best and Fairest Ball at the Kirribilli Club.

More people have worn the black and red guernsey in 2018 than ever before, as the Bombers fielded nine teams. Five of those teams took part in finals, with Under 19s Division One playing in the Grand Final and Seniors, Reserves and Thirds making it to the Preliminary Final in their respective grades.

It has been a year of challenges, without a regular home ground. Work on our home ground at Gore Hill is progressing, and we’ll be back on there in plenty of time for next season.

North Shore has had its share of tragedy in recent times. In the last two years, we’ve felt the passing of two of our players, Tom Aynsley and Victoria Swan. Graeme Swan, Tori’s father, addressed the audience; and our club will continue to support the Swan and Aynsley families.

Awards were presented for all nine teams, and for club awards. The full list of winners is shown below. Our Senior Best & Fairest was taken out by Kyle Devlin, completing an exceptional season where he played a key role in propelling our senior team to the minor premiership.

There are many people to thank. Our sponsors – Mortgage Choice, Prime Constructions, Union Hotel, Dixon Advisory. And everyone who played, coached, volunteered and supported during 2018.

Bring on 2019. Back at Mortgage Choice Oval, and we’re aiming to go even better.

Best in Finals – Will Taylor

Volunteer of the Year – Michele Roseby