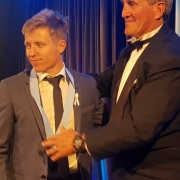 A season that delivered plenty of success was recognised on Monday night, with a strong showing by North Shore in AFL Sydney’s Phelan-Mostyn Medal Night.

Unfortunately our season didn’t deliver any premierships, something we’ll be looking to put right in 2019. But there was some success along the way.

North Shore took out the Club Championship award, an award based on results in Seniors, Reserves and Thirds. With those teams all making the finals, and the Seniors taking out the minor premiership, the

depth of our club was recognised with this award.

The Phelan Medal is awarded to the best and fairest in Seniors (Premier Division). For the second year in a row, Shaun Crane took out the award; with a dominant display all season recognised with 29 votes over an 18 game season. It was a Bomber quinella, with Kyle Devlin coming in second with 20 votes.

The Snow Medal is awarded to the best and fairest in Reserves. Matt Whitbread’s outstanding season was recognised, as he finis

hed with 13 votes to take out the medal.

The Hart Medal is awarded to the best and fairest in Under 19s Division Two. Ben “Boomer” Harvey was successful in taking out that award after an outstanding season.

North Shore President John Goode was also recognised for his tireless efforts at the helm of the club, being awarded AFL Sydney Volunteer of the Year.

Our club awards will be presented at the Best & Fairest Ball at the Kirribilli Club on 13th October. Book your place at https://www.northshorefc.com.au/news/2018/09/best-fairest-ball-dont-miss/