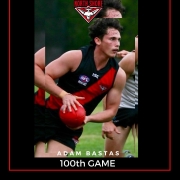 Back-To-Bears Day, brings the players of yester-year back to the Hill again, so it’s a great day to celebrate a new age by acknowledging a local junior form Willoughby Mosman Swans, achieving his 100 game milestone for the mighty North Shore Bombers.

Adam Bastas, affectionately known as “John the Baptist“, is a dual grand finalist with our U19s & Reserve Grade after making his debut for the club in 2016, he’s gone on to play Premier Division, but  this year has probably been a standout with him taking giant strides forward as an inside onballer. A tough tackler who fancies himself on the run outside 50m, The Baptist has made a real impression at the club with his cheeky demeanor & curly locks.

Adam actually cracked 100 games a week or two ago, playing a great game in which he kicked 4, so we’re catching up with his post now.

When interviewed about this milestone match, Elder John added that his favourite movie was Rocky and he wanted to thank his girlfriend Adrian for helping him get there. He did it.

Congratulations on your 100th Adam and we’re really looking forward to seeing what the next 100 brings!!!

Tweets by northshorefc
Womens Elimination Final and Round 17 Team Selections