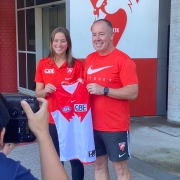 Story by Lauren Crawford. Photos thanks to Andrew Hurrell

North Shore Bombers are delighted to congratulate Zoe Hurrell on being signed for the Sydney Swans inaugural AFLW side, which is set to feature in the 2022/23 season starting in August of this year.

Despite the Swans AFLW side competing for the first time in the highest level of women’s professional footy, they are in no shortage of experience. Hurrell will be playing alongside seasoned ALFW veterans including Rebecca Privitelli, who brings with her five seasons of AFLW experience from both Carlton and GWS.

At just 20 years of age, Hurrell herself brings 10 seasons of AFL experience. The journey of fulfilling a lifelong dream of playing professional footy started back in 2007 when Hurrell spent six seasons donning the Willoughby Mosman Swans jersey.

Zoe’s father Andrew, recounts her early enthusiasm for the game,

“Zoe started with Mosman Swans as a 5 year old, with Tilda Jenkins. Neither had much interest. We got used to seeing the ball sail over their heads while they were busy doing handstands. She soon dropped out to take up netball, and we thought that was that.”

It was only 5 years later, with the introduction of an u.14s girl’s competition, Zoe and Tilda joined along with Erin McKinnon, Nicky Steele and 10 other young women in Mosman Swan’s foundational team.

A very young Isadora Mcleay soon joined them. A fellow North Shore Bomber who signed for the GWS side in 2021. Despite a knee injury setting her back a season, Isadora is looking set to run onto the field in orange in the 2022 season.

The inaugural Mosman Swan’s side went on to win two premierships and amazingly, three of the original dozen are now listed in ALFW teams.These young lady’s early involvement in footy, followed by later professional success, demonstrates the importance of women’s involvement in grass roots footy. The journey to playing at the highest level often starts over a decade in advance, with game sense taking many years to mature, as Andrew Hurrell explains,

“When they started, they thought “kick to space” meant to kick the ball as high as they could. So they’ve come a long way!”

While still a junior at Mosman/Willoughby, Hurrell gained valuable Premier Division experience at Sydney University, but returned to her roots after graduating from juniors to be part of the inaugural North Shore Women’s Premier Division team in 2020. Outside of club footy, Zoe has represented both NSW/ACT and the Eastern Allies.

Zoe has played an integral role in the midfield and halfback for North Shore. Captain of the Women’s Premier side, Emily Matheson made comment on Zoe’s on field contributions,

“Zoe is known for her reliability and composure in the half back line and it’s these attributions paired with her impeccable marking and kicking skills that manages to get the Bombers out of trouble time and time again.”

The Hurrell family are a household name at North Shore, with four members of the family being heavily involved. Zoe’s brothers Nic and Brodie are both in the Men’s Premier Division squad and her father Andrew sits on the committee as Head of Football Operations.

The Hurrell’s have played an integral role in the club throughout the years, as North Shore’s President John Goode explains:

“The Hurrell’s are a great family. The on field contributions of Nic, Brodie and Zoe have been enormous for us and Andrew’s off field work has been vital, particularly in helping us get through a couple of challenging Covid affected years. More importantly though, they’re great people who add real spirit around the club and I’m sure her strong family background will help Zoe get the best out of herself as an AFLW player”

Zoe’s father expresses the importance of footy involvement for the Hurrell family,

“As a heavily committed footy family, we all feel deeply enriched by our experiences in football and relish the journey to come. Kerrin and I are proud of all the work Zoe’s done, persisting with her dream despite disappointment. Getting drafted is a massive thrill and bonus, but we would have been equally proud, had this opportunity never arrived.”

Despite 10 seasons pulling on a guernsey, in many ways, Zoe’s story is only just beginning. Zoe played 99 games in red and white for the Mosman Swan’s and in an incredible turn of fate, in 2022, she will hit the century, donning red and white once again.

An incredibly special moment, as Hurrel herself explains,

“It’s super surreal but I couldn’t be more excited. I’m very grateful for the opportunity and can’t wait to get into it.”

North Shore are incredibly proud of her achievements and accolades to date. We will be watching and supporting every step of the way.

Best of luck in your professional football career, Zoe.

Tweets by northshorefc
Round 10 Fixtures – Saturday 18th May