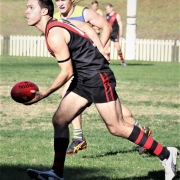 Congratulations to Michael (Bon) Voyage on playing his 200th game for the club tomorrow.

Bon, started with North Shore in 2006 and won a premiership in 2007 going undefeated in the U18s! His team mates tell me that back then he was quite fast, would often break lines from defence and bring down opposition forwards!

In 2008, Bon entered the open competition and made a name for himself as a reliable half-back in the Premier Division side where he played until 2015. At this level, Bon is well remembered for his excellent kick and skilful transition of the ball from defence into attack.

After a brief stint in the UK, Bon returned to the Bombers in 2018 where he continued his form as a reliable player in Division 1 and 2, providing his experience, marking ability and leadership to those squads and was runner-up in the B&F in Division 1 in 2018.

With some twilight now shining on his Bombers career, Bon and Emily recently welcome their first child in May, who will no doubt be cheering Dad on tomorrow and may carry on the family legacy in the years ahead.

Michael’s favourite memories from his time so far at the Bombers has been the camaraderie amongst the club and players every year. He tells me that it “doesn’t matter who is playing, coaching or running the club there has always been a great welcoming and inclusive nature about the club all the time I’ve played.”

For Michael, running out in finals for the club has always been a great thrill and honour. He also fondly remembers a couple of memorable wins in the Premier Division, late on a Saturday afternoon at the old Gore Hill Oval in front of a strong, vocal crowd against teams like like East Coast, Sydney Uni and Penno.

Congratulations on your journey with the Bombers for the past 16 years Michael, for your dedication to the club and to the playing group. We wish you all the best on your way to 250 and in tomorrow’s game! Go Bombers!

Round 10 Scoreboard
Scroll to top