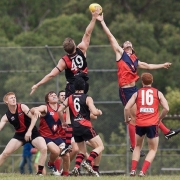 Another big weekend of footy, and we have six home games in a blockbuster day of action at Gore Hill, while another six of our teams hit the road for away games.

Team selections are now up on Team App and the North Shore website.

As a community sporting club, we’re reliant on volunteers to get things done; and at times you’ll be asked to help out. To everyone rostered on for duties this week, we thank you for your efforts.

And we have a special milestone this week, as Sam Jackson celebrates his 200th game for North Shore.

Club President John Goode says of Sam: “He is a star club person. Does every job imaginable, club umpires is coaching a school is on our Executive and has done a great job as our Treasurer through some really difficult times.

“I can remember him playing a game when our home games were out at Blacktown during the redevelopment and working super hard during that game. After the game he was enjoying a drink in the stands when we found out we needed another for a later game, without hesitation Sam put his hand up to help out, even though I’m pretty sure he was exhausted. That typifies him.

“What a lot of the people who are new got the club mightn’t know is that he was a pretty good premier division player back in the day. He was always doing the team thing. It’s fantastic that people like Sam stay around the club and continue to contribute on an off the field. “

Have a great weekend everyone! And let’s hope we get to hear the Bombers team song sung with passion after some great wins!!

Tweets by northshorefc
Round 5 Fixtures – Saturday 7 May

Round 5 Scoreboard
Scroll to top