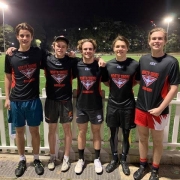 Another season is under way, and the excitement levels continue to build. A flying start to the season for our Men’s teams continues the momentum we are building up for 2020.

Last week we announced our women’s captaincy groups; and now we’re thrilled to announce the captains for our Men’s teams for the season.

North Shore will field five open-age Men’s teams in 2020, along with two Under 19s teams. Such is the strength in numbers that we went close to putting an extra Men’s team and an extra Under 19s team; and the battle for selection will be keenly felt at training this season.

Last year we had teams in the finals in every Men’s division, with Fifths (Division Three) taking out the premiership. Our Under 19s Division Two team played in the Grand Final.

This year we’re hoping to see more silverware make its way to Gore Hill; and we think we’ve got some teams capable of big success this season.

We’re delighted to announce our captains groups for 2020.

Round 2 Teams
Scroll to top