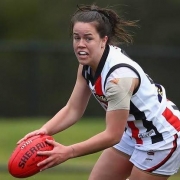 As North Shore gears up for the 2020 season, the first season where we will field a Women’s Premier Division side, we would like to welcome inaugural AFLW Collingwood player Georgia Walker to the club.

Walker is a 20 year old Victoria born girl who spends most of her time on the field either rummaging in the midfield or defending the front lines as a back flank.

‘I started playing in grade 3 with the boys, I grew up playing footy with them at school and watching it with my Dad so naturally played through to a mature age’, Walker comments on her beginnings of AFL as her sport of choice.

From her humble beginnings playing with the boys at the school yard in Victoria, Walker was drafted to the Collingwood women’s side in 2017 for the inaugural season commenting, ‘That’s what everyone strives for so I cannot look past that’, as she reflects on this has her greatest achievement in her AFL career to date.

Walker relocated to Sydney due to both professional and personal reasons, including an opportunity in coaching AFL.

‘Bombers came highly recommended through people I knew and coming down to training the place had a really good vibe’, Walker says about her new club, ‘I got along with Locky and the seem like a really solid bunch’.

Walker’s career took an unfortunate turn after she received multiple concussions leaving her side-lined and unable to play. ‘I’m very nervous for the season’, she comments due to 18 months on the side-lines. Though she is, ‘…really looking forward to taking on a playing-coach role…something I’ve never done so keen for the challenge. Also looking forward to being apart of a new club with a great culture and solid direction’.

Excited for not only the growth in women’s AFL at North Shore which Walker comments is, ‘Bringing new ideas, more people and a greater sense of community and culture’, but also the growth in women’s AFL in general across the nation. ‘I have loved being involved in all areas, loved watching it and loved seeing young girls be inspired and realise the potential that they can do anything’.

As the eldest of four Georgia Walker labels herself as extremely social and always busy which are definitely well fit traits into our social and on the move club at North Shore. As a ‘beach bum’ we hoped that Walker’s move to Sydney not only benefits her love of football as she joins the North Shore Bombers to pull on the black and red but also her love of beaches and coastlines.