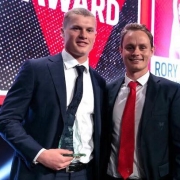 North Shore has a long history of being a nursery of elite talent, and another of our number has been recognised for his ability and hard work.

Rory Barkley has been awarded the NEAFL Development Squad (NDS) Player of the Year for 2019.

Rory has been a standout for the Swans Reserves in the NEAFL this season, putting on the red and white jumper 17 times and consistently out-performing AFL-listed players.

Standing tall, at just 19 years of age, he looks to have a bright footballing future in front of him.

Rory first came to North Shore in our Under 19s squad, and quickly showed he has both outstanding natural talent and the willingness to work hard to learn and improve his game. He made his way into senior football, combining representing North Shore with matches for the Swans and in representative squads.

This season has been a standout, as he has established a regular place in the Swans Reserves lineup and has shown himself to be more than capable at matching his efforts against AFL-listed players.

Congratulations Rory. Hope to see you playing some great footy for many years to come.

Tweets by northshorefc
Grand Final Day at The Union