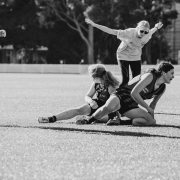 The growth in North Shore womens’ playing numbers has been well documented. Taking the plunge into women’s footy for the first time in 2017, the Bombers fielded one team in their first season, two teams last year and three teams this season. And such is the level of interest that we’re looking at putting four teams on the park next year.
But it’s not only in playing that North Shore women are on the rise. We’re seeing more North Shore women put on the lime green and blow the whistle; answering the call for club umpires for our ever-increasing number of teams.
This weekend, every match where North Shore have club umpires, it will be a female umpire. We think that’s a first in Sydney footy; certainly a first for a club of our size.
Matilda “Tilly” Eder was the first North Shore female club umpire, blowing the whistle for the first time last year. This year she’s been joined in umpiring ranks by Kaitlin Mesiti and Isabelle Smith.
Under the watchful eye of umpiring co-ordinator Tom Shanahan, himself an AFL Sydney-listed umpire, all three have grown in their feel for the game and developed their umpiring to the level where they have the respect of both male and female players when they take the field.
It’s part of the culture of the women’s program at North Shore that Peter Gurry and his team have built over the last three years, that people are willing to get involved, take on a new challenge and grow in their knowledge of the game.
Congratulations Tilly, Kaitlin and Izzy. Bombers making history.