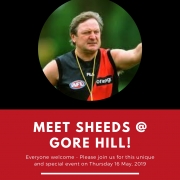 North Shore is thrilled to announce that Kevin Sheedy has come on board as our club’s No 1 Ticket-Holder.

In our game, he has a record second to none. A long playing career with Richmond. An even longer coaching career with Essendon, and then the first coach of the Giants. Plenty of premiership medals; a visionary and innovator in our game.

And he’s coming to Gore Hill next Thursday, 16th May.

Be there at 6:30pm for an open kick-to-kick. Bring your footy, and we’ll see plenty of people on the oval kicking the ball around.

At 7pm, we’ll need to get everyone off the oval; but we’ll have a meet and greet on the hill and a chance for autographs and selfies.

At 7:30pm, Kevin Sheedy will be putting the Senior squad through their paces as he runs training for the night. We’ve got a big game coming up on that Saturday, so this is an important session for our senior squad and they have the opportunity to learn from one of the all-time greats. Stick around and watch – we’ll have the canteen open and food & drink will be available.

Come and join us at Gore Hill for this special event.

Tweets by northshorefc
From our Sponsor – Dixon Advisory