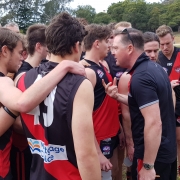 AFL Sydney has released the draws for 2019. Round 1 is on Saturday 6th April.
Our Seniors & Reserves are on the road to take on Inner West Magpies (formerly known as Wests) at Picken Oval. Seniors at 2.30pm, Reserves at 12.30pm.
Five of our teams have home games. The honour of being the first team to play for points at Gore Hill goes to our new Women’s Thirds, who play St George at 9am.
That will be followed by Women’s Seconds v Macquarie Uni at 10.40am, then Women’s Firsts v Wollongong at 12.20pm.
There’s a gap in the program after that so we may bring the next 2 games forward but the current fixture has Thirds v NorWest at 3.50pm and Fifths also playing NorWest at 5.40pm.
Under 19s Div 1 are on the road, playing East Coast at Kanebridge, starting at 9am.
Fourths & Under 19s Div 2 have another week to wait, being drawn the bye in Round 1.
Click the links below for our season fixtures: