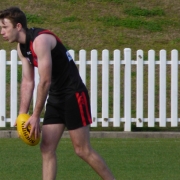 Super Sunday at Blacktown will be a big day for North Shore. Especially so for a long-time stalwart of our club, as Chris Murphy pulls on the black and red guernsey for the 200th time.

Chris came to North Shore around 2005, and his tough defensive work soon became a key part of the Bombers’ team line up. He played in our 2007 senior premiership side as a 19 year old and has been a regular in our senior team ever since.

Many an opposition attack has been blunted by Chris’ marking power and his golden-fist spoils. His efforts on the field have been highly recognised. He won our Best and Fairest in 2016, and is a Life Member of North Shore.

Chris has played an important leadership role around the club for several years; and many defenders around our club have learned a lot from Chris’ guidance and example. Even when injury has prevented him from playing, Chris has still been around the club putting every effort in as assistant coach for the Premier Division.

Willing to get his hands dirty when there’s a job to be done; Chris’ efforts as a clubman are an example of what community footy at North Shore is all about. 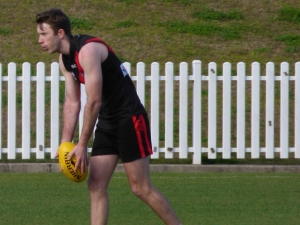 Congratulations on the milestone Chris. 200 great games for the Bombers. And hopefully many more to come.

Round 8 Teams
Scroll to top